Skip to content
What are you doing for New Year then?  There was a time when this question would be followed with excited gossip and a swapping of intended party itineraries. Nowadays the response is a grunt of irritation topped off with a competitive ‘who’s had the worst New Year ever’ conversation.  My cheerful chatter was successfully slapped down every time I broached the subject and I wondered whether New Years has had its day as the ultimate boogie excuse or am I just surrounded by party poopers? 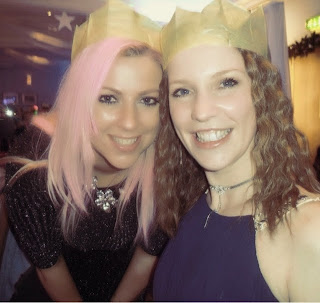 “Its all down to peer pressure” my friend Ali informs me. “Everyone wants to appear to be a social butterfly, flitting from party to party exuding glamour and gorgeousness whilst effortlessly accruing intriguing but funny anecdotes to discuss with friends and colleagues for the next 12 months.  The reality rarely delivers”.  I ask her to expand on this.

“Well for starters you have to book 4 months in advance to get your hair done, which usually flops in the wind as soon as you leave the salon.  Next you book a taxi weeks in advance and reluctantly agree to pay double fare which you know is going to cost you triple on the way home.  Then you queue to get into anywhere half decent and just as you are about to die of hypothermia the doorman informs you that it is ticket only, so off you toddle to the sort of dive that you would never normally enter for fear that the sticky carpets will ruin your new shoes or your hair will catch in the teenage vomit whilst you are using your head to try and hold the toilet door shut and pee at the same time.  Even the doorman looks sympathetic as he allows you entrance whilst simultaneously separating drunken yobs that are trying to karate chop each other.  You hand over the £10 entrance fee then immediately join the scrum for the bar and as you wait your turn you already know that you are just too old for all this malarkey. Finally you are served your watered down alcohol just as the chants of ‘“5,4,3,2,1 Happy New Year”’ ring out, but where are all the sexy fellas holding mistletoe in the air? Oh they are there alright but instead of mistletoe they are holding mobile phones in the air desperately trying to get a signal so that they can tell there spouses that they are on their way home, leaving only the males on a mission to consume as much beer as possible, snog a few females, have a punch up, throw up, sleep under a bridge and then police ride home”. Wow – that girl paints a heck of a picture!!
Determined to hear something good about New Years from someone, I turn to Dewi. “Well from a blokes perspective then, what do you look for in a New Years night out?”  His reply “What she said but with more lady lovin” Typical!
“Okay Jackie, How about you?” Jackie then answers dreamily “I remember when we used to have traditional family get-togethers and at midnight someone would come through the front door with a lump of coal and this would be considered bringing in the New Year” to which Ali responded “Yeah, I did that once and they forgot me.  I was standing outside freezing my knockers off whilst they were popping champagne corks inside.  New Year Sucks!”

With this sentence ringing in my ears I head home to my husband, determined that I would prove them all wrong.  Hubby and I are going to have a Rockin Night!  “So my lovely hubby, what are we doing for New Years?”  He sighs and gives me a pitying look, “Lynz, New Years is for single, beer monsters on the pull that are daft enough to pay extortionate…Blah, Blah, Blah” I tune out.  It sounds as though we are having yet another night setting the alarm clock for midnight, a quick kiss then fall back to sleep to the sounds of party monsters outside.  Woo Flippin Hoo 😦

This site uses Akismet to reduce spam. Learn how your comment data is processed.